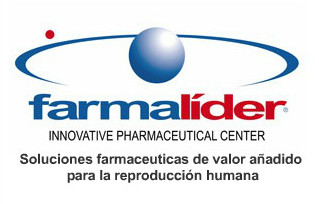 Background Since the 1990s recombinant human FSH (r-hFSH), such as Gonal-f® and Puregon®, have been in widespread use for fertility treatment [1]. More recently Bemfola®, biosimilar to r-hFSH, has been introduced with similar efficacy and safety to Gonal-f® [2], but delivered in a novel, innovative injector pen system (Reddot design award 2011). The Bemfola® pen (BP) is a single-use, disposable pen available in five different presentations (i.e., 75IU, 150IU, 225IU, 300IU and 450IU), each of which provides a range of doses that it can deliver. Non-compliance to hormonal treatment regimens might be a critical issue to reach therapeutic goals. The use of pens by patients is often limited by factors such as fear of injection, but can be also related to the device itself [3-6]. Therefore, easy-to-use devices may also positively influence physicians’ hormonal prescribing habits and patient’s compliance. Accordingly, this user acceptance study aimed to assess the use of the Bemfola® pen in a population of potential users with regard to the easiness and convenience of handling of the Bemfola® Pen in comparison to the Gonal-f® pen and Puregon® pen. Material and Methods Randomised and single-blind study with three-arm user test. The investigation was conducted in females who considered undergoing hormonal treatment for the first time (naïve) and who were considering to start an IVF or donor egg treatment cycle. A total of 10 centers from Spain participated in this investigation. This study of user acceptance included 460 females qualifying for potential patients considering a therapy with follicle stimulating hormone. Users received the three pens in a randomized, consecutive sequence, completed for each of the pen one questionnaire (same for all 3 pens) and thereafter completed a concluding questionnaire comparing the handling, convenience and indicating their preference among the 3 pens. No self-injections were performed and an application pad for injections was used. Results The Bemfola® pen showed the highest scorings and strong preferences in all pen features assessed and achieved the highest proportion of best choice compared to both the Gonal-f® and Puregon®. pen. Conclusions The results indicated significant preferences of women, who intended to undergo a hormonal treatment, for the Bemfola® pen compared to both the Puregon® pen and the Gonal-f® pen. 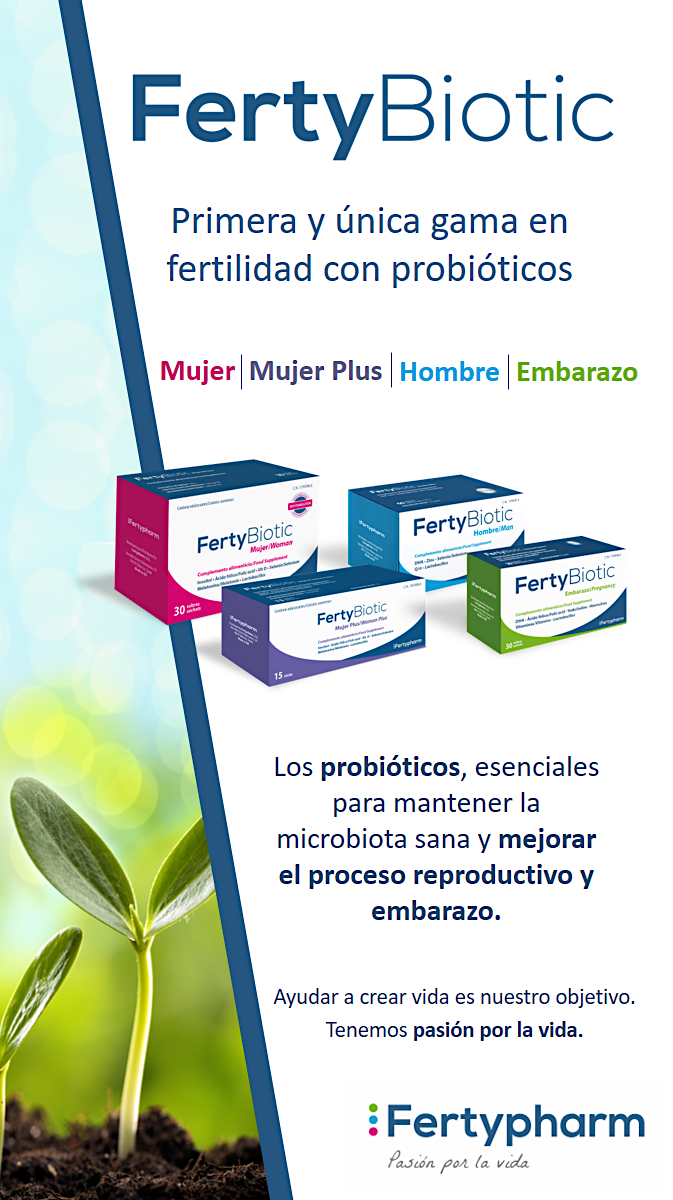 Since the 1990s, recombinant human follicle stimulating hormone (r-hFSH), such as Gonal-f® and Puregon®, has been widely used in the treatment of fertility [1]. More recently Bemfola®, biosimilar to r-hFSH, has been introduced with similar efficacy and safety to Gonal-f® [2], but delivered with an innovative injector pen system (Reddot design award, 2011). Bemfola® is a single-use disposable pre-filled pen, available in five different presentations (75 IU, 150 IU, 225 IU, 300 IU and 450 IU), each of which provides a certain dosage range. Non-compliance with hormonal treatment guidelines is a fundamental problem in the achievement of therapeutic goals. The use of pens by patients is often limited by fear of injection and even related to the device itself [3-6]. Therefore, user-friendly devices can have a positive influence on both the physician’s prescribing habits of hormone therapies and the patient's compliance. Consequently, the aim of this study is to evaluate the use of Bemfola® in a population of potential users with respect to its ease and convenience in handling compared to Gonal-f® and Puregon® pens.

This market survey of user acceptance was carried out on women who had not been previously treated and who were considering either initiating an IVF cycle or being oocyte donors. Once the study was explained to these “potential” patients and after obtaining their consent, they received the three pens (Bemfola®, Gonal-f® and Puregon®), in a random and consecutive sequence, and completed an identical questionnaire for each one of the pens (See Table 1). Finally, they completed a concluding questionnaire comparing the handling, comfort and preference of the 3 pens. No self-injections were performed and injection instructions were used to evaluate the following pens: 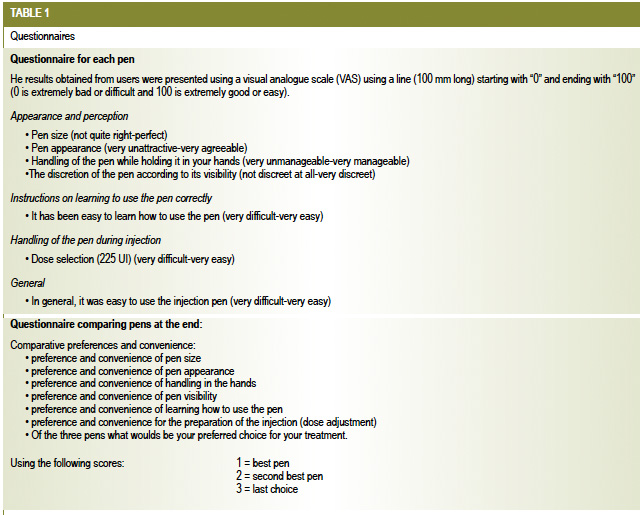 Between July 3, 2015 and January 26, 2016, questionnaires were completed by 460 users. The population of analysable patients consisted of 458 women, since in 2 cases the test sequences of the three pens were incorrect. Therefore, 458 patients were included in the complete analysis set. The mean age (SD) of the participants was 32.7 (5.0) years (Median: 33.0; Min - Max: 19 - 47). The mean (SD) of the visual analogue scale (VAS) (0 to 100) on “Appearance and perception” (4 items), “Instructions on learning to use the pen correctly” (1 item) “Handling of the pen during injection” (1 item), “General” (1 item) and the mean of the seven items are shown in Table 2 and Figure 1, and the results of the statistical analysis in Table 3. The Bemfola® pen showed the highest mean values (SD) of VAS in the seven items. The summary of the VAS mean of the Bemfola® pen was 76 (20) and approximately 15 points higher compared with administration of the Gonal-f® pen 61 (24) and the Puregon® pen 62 (24) (Table 2). Significant differences in VAS mean values (SD) were observed in the evaluations of the 4 items of “Appearance and perception”, while differences in “Ease of Use” and “Handling” were less pronounced (Table 2 and Figure 1). The mean (SD) VAS score between the Gonal-f® and Puregon® devices was similar across all items. The differences between Bemfola® and Gonal-f® and between Bemfola® versus Puregon® were very significant (p <0.0001, using the paired test-t test for the difference) (Table 3). Statistically significant differences between the Gonal-f® pen and the Puregon® pen were only observed in the items “Appearance of the pen” and “How discreet is the pen” in favour of the Puregon® pen. The Bemfola® pen showed the highest proportion of “best” choice in all seven items (Table 4). When subjects were asked what their overall preference was, 438 of the 458 responded and 56.6% indicated that Bemfola® was their preferred option (Figure 4). The classification of the Bemfola® pen of “best” preference was increased for the items “Pen size” and “Pen visibility” (Table 4). Marked preferences were noted in the “Appearance of the pen”, “Handling of the pen in the hands”, and “General preference” items, while preferences under the items “Learning to use pen” and “Preparation of the injection dose” were less pronounced. The “last” option of the Bemfola® pen revealed a special pattern with higher scores for the “Learning how to use the pen” and “Preparing the injection dose” items. Significance and p-values analyses confirmed the preferences for the Bemfola® pen, showing very significant differences between Bemfola® compared to Gonal-f® and Puregon® in five of the seven items (Table 5). The level of significance for the remaining two items .

“Learning how to use the pen” and “Preparation of the injection dose” was minor and not significant in the item “Preparation of the injection dose”, comparing the preference of Bemfola® versus Puregon®. The scores for the Gonal-f® pen and the Puregon® pen were similar. The overall mean of the scores was slightly higher for the Puregon® pen, as well as for the three elements “Appearance of the pen”, “Handling of the pen in the hands” and “Preparation of the injection dose” in comparison with the Gonal-f® pen score. However, the statistical significance is shown only for the “Appearance of the pen” item, and was in favour of the Puregon® pen (Table 5). Figure 2 shows a bar chart in “best”, “second” and “last” of preferences for the three pens. There is a consistent pattern and sequence of the six items and the overall preference was: Bemfola® >> Puregon® > Gonal-f®. The “best” portion of the Bemfola® pen compared to the Gonal-f® pen and the Puregon® pen for the six items and the overall preference are shown in Figure 3. In general, in terms of “General pen preference” 56.6% of the 438 respondents considered Bemfola® their overall preference as the best pen (Figure 4), and between 50% , and 75% considered the Bemfola® pen the best pen in relation to the items “Pen size”, “Pen appearance”, “Pen handling” and “Pen visibility” (Figure 3). 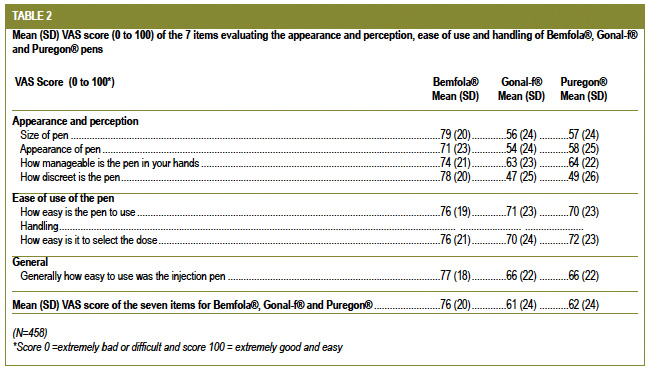 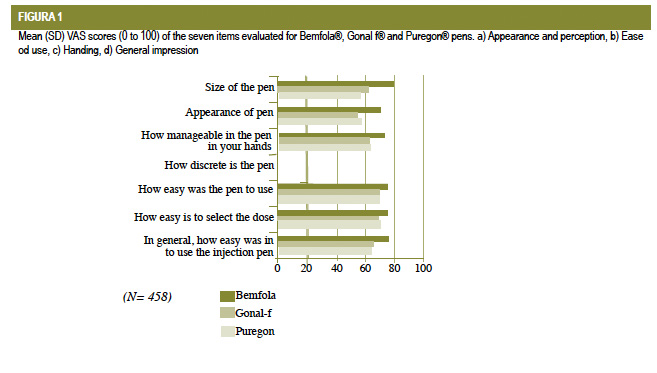 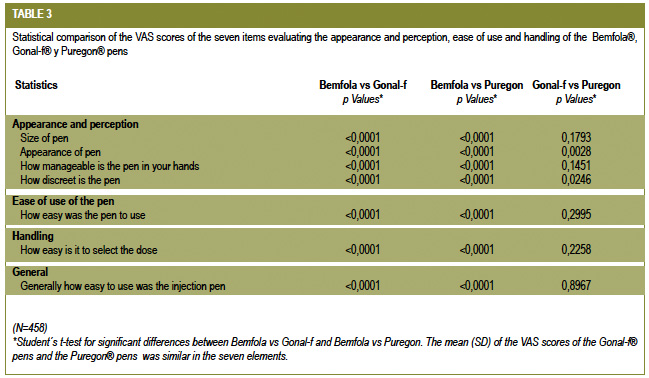 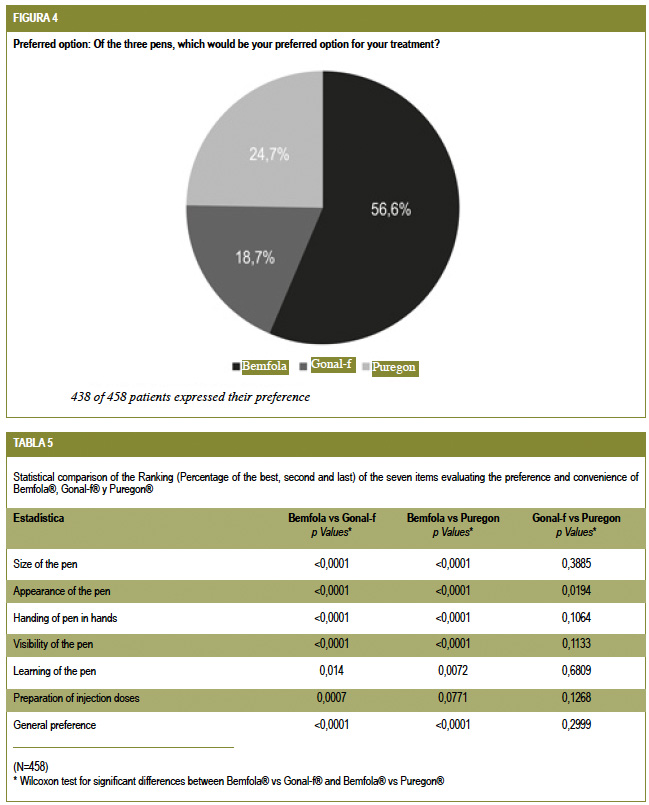 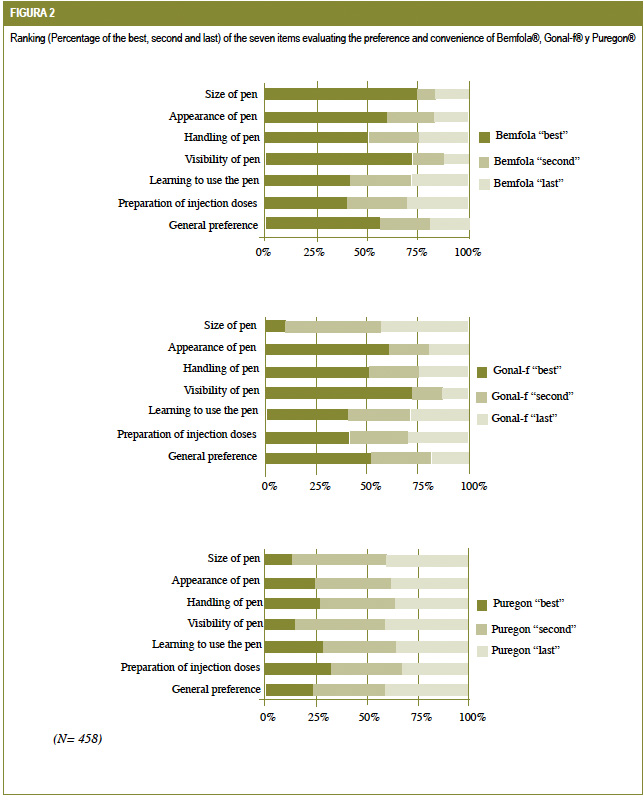 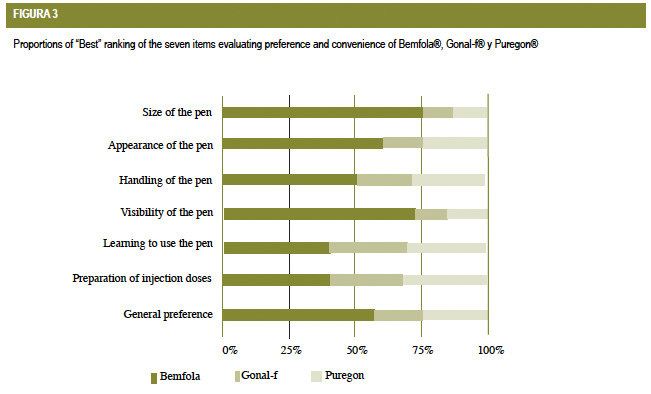 This user acceptance study, carried out in 10 fertility centres in Spain with the inclusion of 460 women included as “potential patients of hormone therapy with recombinant human follicle stimulating hormone”, aimed at evaluating the Bemfola® pen in comparison with the Gonal-f® and Puregon® pens, in terms of appearance and perception, ease of use and convenience and preferability of handling. The Bemfola® pen showed the highest score and high preferences in all evaluated characteristics, and achieved the highest “best” ratio compared to the Gonal-f® pen and the Puregon® pen. The results obtained in the present study demonstrated significant benefits and preferences for the Bemfola® pen compared to the Gonal-f® and Puregon® pens, and are in line with the results of earlier research carried out on a  smaller population of users in Swiss and British fertility centres [7].

The results confirmed a greater benefit of the Bemfola® pen because of its characteristics and preferences, which showed considerable differences with the Puregon® pen and even more marked with the Gonal-f® pen.

The authors declare no conflicts of interest related to the publication of this document.


Declaration of support for this research
This study has been sponsored and funded by Finox Biotech S.L 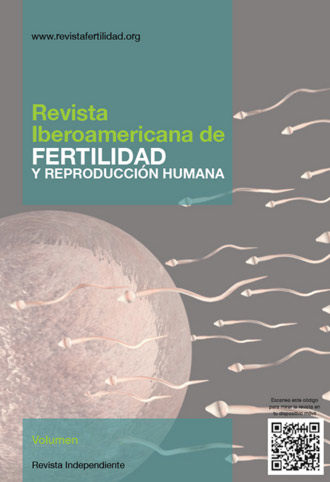